What can teeth tell us of our evolutionary past: Interview with Peter Ungar 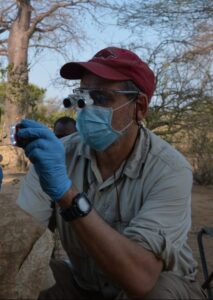 Fossilized teeth carry important information about the diet of our ancestors. Peter Ungar, a paleoanthropologist, specializes in the study of teeth. He has studied primates in the rain forests of Latin America and Southeast Asia as well as the teeth of extinct animals from tyrannosaurids to Neanderthals to uncover their diet, and through diet the ecosystem they lived in. One of his major contributions to his field of study was the development of advanced techniques for surface analysis of teeth to study microscopic dental wear brought about as a result of their use.

Professor Ungar, currently Director of Environmental Dynamics at the University of Arkansas, has authored more than 160 scientific articles on ecology and evolution as well as several books, including ’Evolution’s Bite: A Story of Teeth, Diet, and Human Origins’ which was published earlier this year.

We frequently hear that the morphology of our teeth provide adequate evidence of humans being omnivores. However, our personal clinical experience with an animal meat-fat-based diet has revealed it as being superior to any other diet in terms of ameliorating recovery from several different diseases. We view this as an indication that humans are meat-eaters rather than omnivores. To resolve the apparent conflict between teeth morphology and the evolutionary adapted diet we propose the Liem’s Paradox.

The Liem’s Paradox pertains to an apparent conflict between morphological adaptation and actual use. It suggests that in an evolutionary time scale the morphology of teeth does not necessarily change with a change in the diet. Overall, preserving the morphology of teeth from an earlier evolutionary stage may be beneficial if the old morphology is compatible with both the old and the new diets, but the preferred new diet items are not always available.

What specifically caught our attention about Peter Ungar’s research is that he suggested Paranthropus boisei, an extint hominin, as a first hominin example of Liem’s paradox. According to Peter Ungar, Paranthropus boisei, also nicknamed ”Nutcraker Man” because of his large molars and strong chewing muscles, which should have indicated consumption of nuts or seeds, in fact ate soft foods most of the time as evidenced by research on molar microwear. Interestingly, the closest example of Liem’s paradox is a fish from the East African Great Lakes, whence the paradox originated.

A quote from Peter Ungar which captures Liem’s Paradox in very simple terms: “I like to use this analogy: If you eat Jell-O 360 days out of the year but if you’ve got to eat rocks the other five days, your teeth had better be designed to eat rocks.”

We have many questions regarding teeth and evolution; we contacted Peter Ungar to ask a few of them. Paleomedicina: When and why did you start studying the teeth of our forbears?

Peter Ungar: I’ve been interested in being a paleontologist since I was five years old, but started studying teeth in graduate school. My studies really began as a class project, but it soon became clear to me that teeth are the best guides we have to understanding the diets of our ancestors. And since diet is the direct link between an animal and its habitat, it is important for understanding ecology, or the relationship between an animal and its environment. And that, in turn, is the key to understanding evolution… when the environment changes, available foods change, and animals have to evolve to adapt.

Paleomedicina: How exactly are paleoanthropologists able to reconstruct diet from fossilized teeth?

Peter Ungar: There are many ways – it comes down to two types of evidence. One line of evidence is adaptive (things you get from your parents) — tooth size, shape, and structure. This tells you what an animal’s ancestors evolved to eat. The other line of evidence is what I call “foodprints”… actual traces of past behavior. That includes microwear, isotopes, and bits of food trapped in tartar (calculus) on teeth.

Paleomedicina: What methods are used to infer diet from teeth?

Peter Ungar: You can look at tooth size and shape to tell whether animals evolve to eat tough foods, like leaves or meat or hard ones, like nuts or bone. Sharp teeth = tough foods, blunt, thick teeth = hard ones. You can look at microwear (scratches and pits caused by chewing) also to tell tough (scratches as teeth shear past one another) or hard (pits as teeth push together). You can look at isotopes (e.g., carbon) to tell something about the chemistry of the foods eaten as the teeth were forming – these are the raw materials used to make the teeth. A high % of carbon 13 = tropical grass products, a lower % = bush/tree products.

Paleomedicina: For how long a time before death are isotopic studies of teeth able to provide information about diet?

Peter Ungar: Isotopes reflect the period during which teeth are formed. Typically a month or two during childhood.

Paleomedicina: You suggested Paranthropus boisei as a first example of Liem’s Paradox. Are you aware of any other hominins, either extinct or currently living, representing the Liem’s Paradox?

Peter Ungar: Liem’s paradox really applies mostly to Paranthropus robustus at this point – it has mostly soft foods, but apparently was adapted to hard ones, which it ate on occasion when preferred soft ones were unavailable.

Peter Ungar: Not really… Liem’s Paradox is really about preferring foods that your teeth are not “designed” for. Doesn’t matter what those foods are. The paradox is that those with specializations for mechanically challenging foods are really generalists — those specializations allow animals to eat foods that are both difficult to process and easy to process. If you are evolved to eat rocks, you can prefer pudding but also eat rocks – even if you only need to eat rocks a couple of days per year to survive. The other part of the paradox is that animals tend to avoid the very foods to which they are adapted when they can because easier to eat foods are often preferred.

Paleomedicina: Are there any studies looking for possible remnants of food on fossilized hominin teeth possibly containing DNA? How realistic are such attempts?

Peter Ungar: Yes! Some recent studies of Neandertal teeth have examined food DNA (both plants and animals) trapped in the calculus attached to the teeth. I have also been involved in studies of 2 million year old hominins where phytoliths (bits of silica from plants that are identifiable) were trapped in calculus too. This is an exciting new area of study.

Paleomedicina: What are the major directions in the research of fossilized hominin teeth?

Peter Ungar: I think the most promising direction for future work is the combination of adaptive evidence and foodprints. This can tell us whether animals in the past regularly ate what they evolved to eat, and what their foraging strategies were in changing environments.

Paleomedicina: Are you aware of tooth studies in prehistoric dogs?

Peter Ungar: My travels over the past month were in part to the Czech Republic to make high-resolution dental impressions of canids from Predmosti claimed to be among the earliest “dogs” (26-27,000 years old). There are two types of canid at Predmosti, and there is a huge debate as to whether one was domesticated and the other was a wolf, or whether these were two types of wolf. In fact, there is substantial disagreement as to whether dogs were first domesticated during the Pleistocene (@ 36,000 years ago) or during the transition to agriculture. Over the coming months we’ll study these two samples and determine whether their microwear patterns differ in a way that could inform us on the debate.

Paleomedicina: What do you think of the possibility that stuff other than food leaves a “footprint” on the teeth? For example, using the teeth to deal with ropes or other kinds of binding material. Or the Inuit, for example, have a specific drill which is used by the teeth. Dogs like to chew pieces of wood for play.

Peter Ungar: Certainly other things leave marks on teeth. Seamstresses have grooves for thread, proto-historic hunters have beveling of the incisors for processing arrows, and Inuit evidently have scratches from stone tools used to cut meat clamped with the incisors. There are many such examples of “paramasticatory” behaviors (that’s what they are called) recorded in the teeth. These have been used to infer such behaviors from wear (both gross wear and microwear) on front teeth of Neandertals.

Paleomedicina: What is your Hungarian tie?

Peter Ungar: My grandparents emigrated from Hungary. My grandmother grew up in Sarospatak, and my grandfather came from Napkor (a small village near Nyiregyhaza). Figure: Advanced surface analysis by Peter Ungar shows that all Paranthropus boisei specimens had light microwear, none had the large, deep pits expected of a hard-object specialist or the uniformly large, deep and parallel striations observed for tough food grazing mammals.
Source: http://journals.plos.org/plosone/article?id=10.1371/journal.pone.0002044