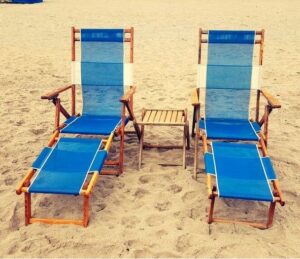 To begin with, if you like having a nice sunbath, say, after swimming, don’t be sure that you’ve done enough to get the vitamin D your body needs. The source of our perpetual vitamin D deficiency lies in our diet, which contains less and less food of animal origin. We can hardly help with our vitamin D deficiency without changing our everyday diet or if we depend on sunshine alone.

Vitamin D has recently come into the focus of attention in the public mind as well as in medical science. Now it seems that its importance has at last been recognized. Almost everybody knows today that the level of vitamin D does not only affect the bones alone. In fact, low vitamin D levels can pose health risks such as various infections, and have been associated with cancer, cardiovascular diseases, and autoimmune diseases like multiple sclerosis and rheumatoid arthritis.

However, some misconceptions that still exist today about vitamin D need some clarification. One is, for instance, the question from what source man should (or can) obtain his vitamin D according to his evolutionary program.

When one enters a drugstore, a bio shop or perhaps a pharmacy, the large number of vitamin D preparations offered will take him aback. Could it be the answer to the vitamin D problem? Some say that it could, provided it is combined with sunshine exposure. Well, we would like to explain in this article why that is not the optimal choice.

It is a fact that in summer the sun’s ultraviolet beams (UV-B) produce a relatively large amount of vitamin D in our skin from a specified form of cholesterol. Scientists engaged in vitamin D research often cite data that show a correlation between the blood’s vitamin D level and the latitudes at which people live as well as the number of sunshine hours, to support the conviction that the primary source of vitamin D is the sun. They call vitamin D the “sunshine vitamin”, and a book on vitamin D with the same title has actually appeared in Hungary, too.

As we are proceeding north, we receive less and less sunlight, which strikes us at a smaller and smaller angle. Researchers on vitamin D usually agree that because of the lower angle of the Sun above certain latitudes it is impossible to meet our requirement for vitamin D from sunlight alone. In winter, above 50° latitude vitamin D is not synthesized in the skin at all. Furthermore, the half-life of the vitamin is three weeks, and if we do not get additional supplies, the amount of vitamin D in our blood could drop below a critical level in about two months.

It gives reason for thought, however, that areas above 50° latitude were always widely populated during the long history of humankind. The Inuit tribes, for example, conquered the Arctic regions up to a geographical altitude of 80° – and they did not need vitamin tablets or sunbeds to do that. Several peoples inhabited, or still inhabit, the areas above the Arctic Circle, where they do not receive much sunlight because the frosty environment does not allow them to take off their clothes outdoors. These people remain healthy and do not show symptoms of vitamin D deficiency as long as they defy the customs and dietary habits of the civilized part of the world.

It is quite easy to see that if the Sun were the only source of vitamin D, the Arctic communities would never have access to sufficient amounts of the vitamin. In the Ice Age, which actually occurred not too long ago (the last glacial period ended about 10,000 years ago), our ancestors had even less sunlight than they would have today. Man could definitely not survive the glaciations that occurred in the Paleolithic epoch (i.e. the last 2.6 million years) if he depended on the Sun as his main source of vitamin D.

A study testing the levels of vitamin D3 in the Komi, a Uralic ethnic group living in Russia, was conducted a few years ago. Measured was the vitamin D3 levels first in a group of the Komis who adhered to their traditions, including traditional eating habits (they engaged in reindeer herding), then in another group whose members abandoned their traditional lifestyle and moved to live in a town 30 kilometres away. There was no difference between the two groups in terms of sunlight exposure: both wore heavy winter clothes outdoors, covering their bodies from top to toe. However, the vitamin D3 levels of the group living their non-traditional life in the town, was significantly lower, while the same level in the group leading a traditional life and having a traditional diet was in the normal range. 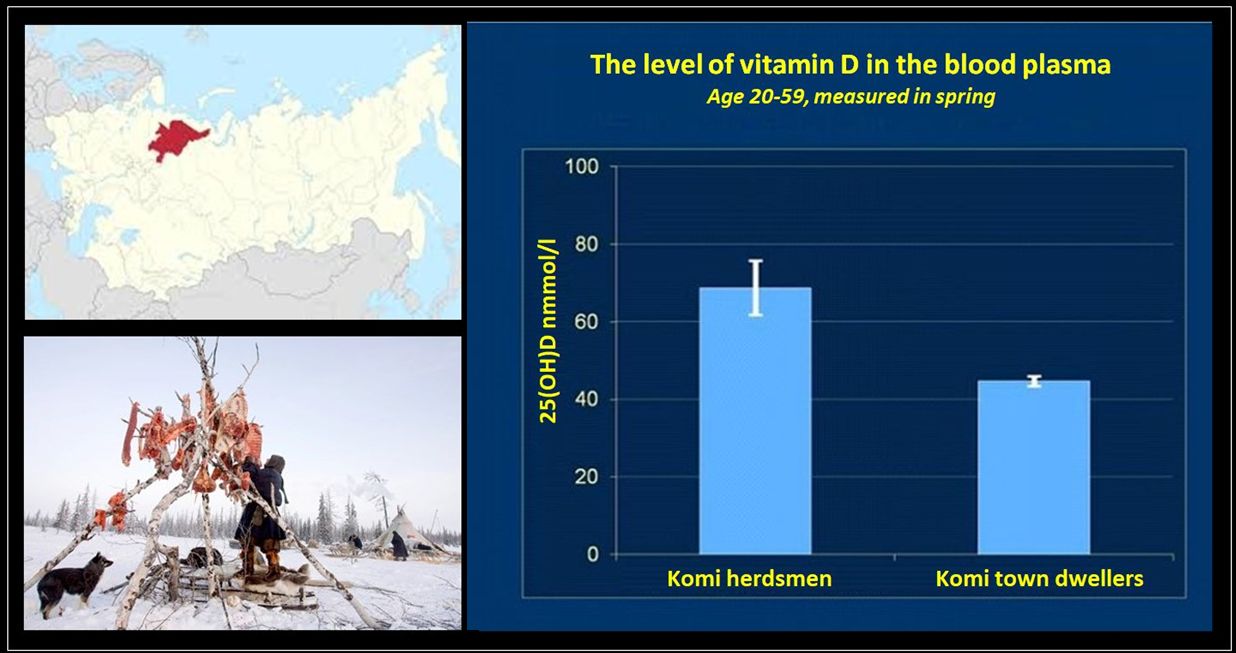 The vitamin D3 blood levels in the Komi living a traditional life in the tundra and those living in town showed a significant difference.

There is also further evidence to prove that the vitamin D level greatly depends on nutrition, and that appropriate nutrition alone is able to supply a satisfactory amount of vitamin D to our body even if we miss sunlight and don’t take vitamin D tablets. A study of the Inuit living in Greenland has found that the more western-type foods, such as fruits, vegetables, breads and pastries, milk and milk products, the local indigenous Inuits ate, the lower the vitamin D level in their blood was. And, conversely, the more traditional Inuit foods like meat and fat they consumed (that is, the more they retained the paleo-ketogenic diet), the higher the vitamin D level was in their blood. 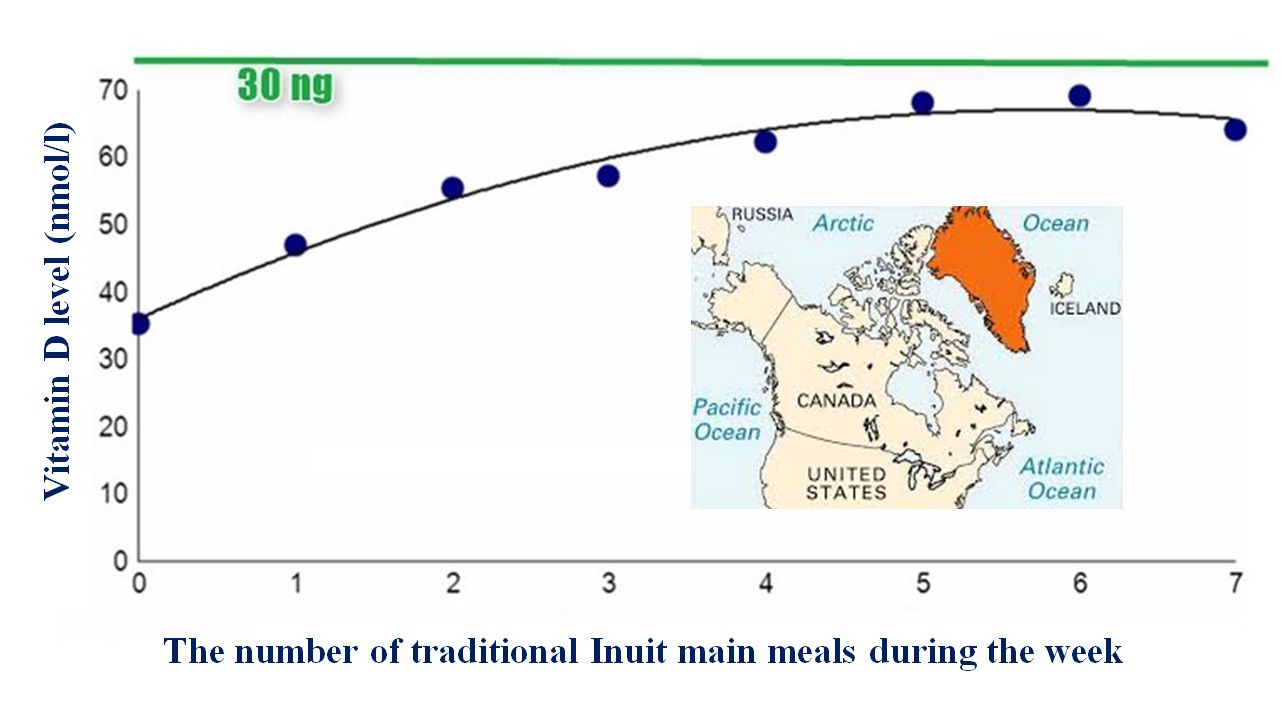 The Greenlandic inuit have progressively abandoned their traditional lifestyle and diet. At the same time, the more often they eat traditional Inuit foods, the higher their vitamin D levels are. The vitamin D levels of the Inuit eating traditional dishes (fish, whale, sea mammals) are close to 30 ng/ml, which can be considered normal

The correlation between latitudes and vitamin D sufficiency researchers have been “used to” (i.e. that the farer we travel north, the lower vitamin D levels we find) would immediately disappear if they paid attention to hunter and gatherer populations and other peoples close to nature. A study analysing groups of people with European and non-European roots separately, found that vitamin D blood levels in locations far from the Equator decreased only in the case of Europeans (Hagenau and colleagues, 2008).

In the Paleolithic period, our ancestors hunted wild animals for meat all the year round, though sunlight-triggered vitamin D synthesis was limited to only a few months of the year, in the same way as today. It is then a logical conclusion that man during his long evolutionary history relied much more on nutrition than on sunlight.

On the other hand, the same factors, and various others, for instance the inflammation factors in our body, also affect the degradation of active vitamin D3. These are intricate biochemical mechanisms and their understanding requires profound knowledge of physiology. Self-appointed dietitians certainly do not dispose of such knowledge, so we might easily be misguided if we consult them on vitamin D.

The key to the vitamin D issue is not only how much inactive vitamin D3 enters our body, but also how it becomes useful active vitamin D3. If we listened to the self-designed paleo advisors, who are attracted to vegetable-and-fruit based diets as a rule (for instance, the nowadays trendy but entirely unscientific AIP diet), two or three fruits a day could easily ruin effective inactive-active vitamin D transformation.

Here follows an excellent physiological survey on vitamin D recommended for specialists as well as beginners who wish to improve their knowledge. It was written some time ago, but the basics of physiology do not change.

The following statements are in place about vitamin D based on biochemical, physiological and ecological research findings: 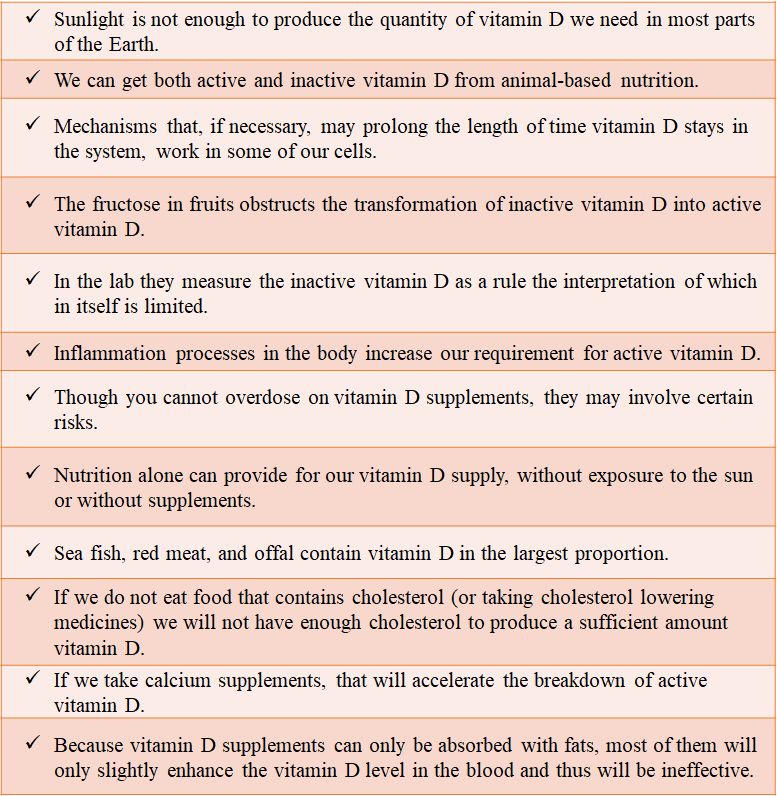 The reason for continual vitamin D deficiency in civilized human beings lies in their diets. Ever since we were warned against eating animal-based nutriments, our vitamin D levels have constantly been low.

Well, don’t think that your love of the sun and sunbathing will solve your vitamin D problem. If you want your vitamin D3 level to be balanced, if you want to ensure your child’s well-being and maximally diminish the risk of cancer, autoimmune disease and other diseases of civilization, consider these five important advices: 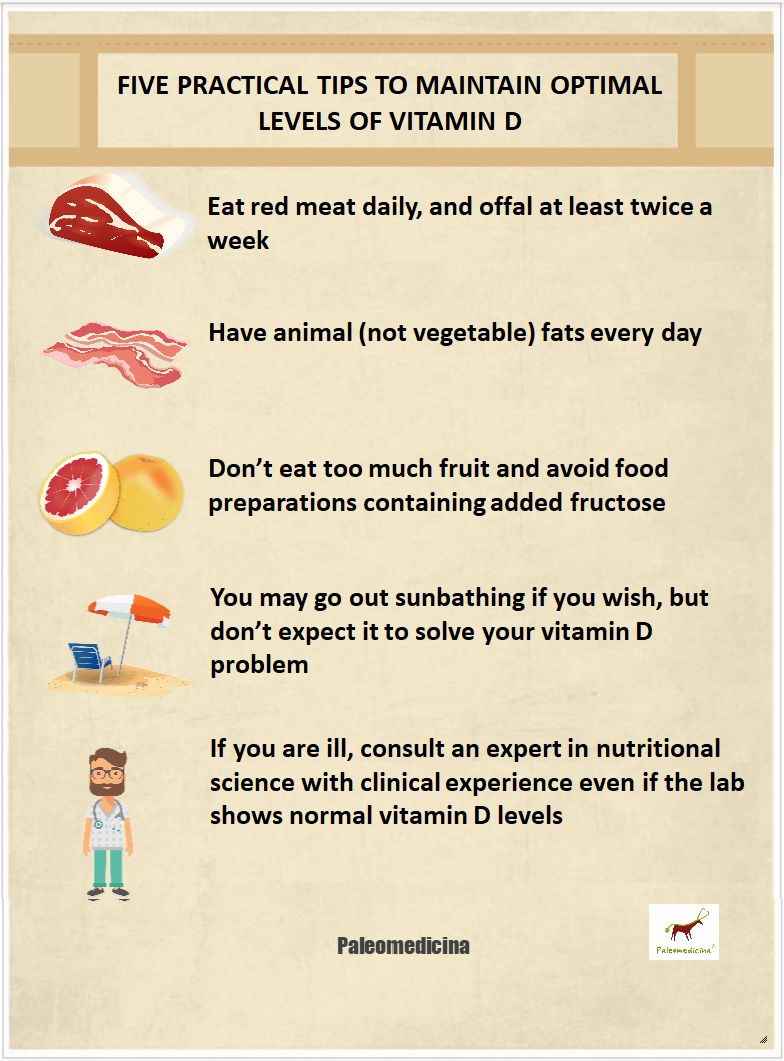 We should take a complex approach to our diet instead of getting lost in the multitude of nutrients and foods. Even petty errors can have fatal consequences. Our advice is to follow the nutritional trail ideal for human beings: the paleo-ketogenic diet. We may, of course, depart from this method and let ourselves be tempted by the allures of gastronomy, but in that case we might end up paying for our mistake.

Let me make a personal comment. It’s been evident ever since the heroic age of the paleo diet in Hungary, that the assumption that we should get the vitamin D we need from sunlight, cannot be accepted. Then it turned out that vitamin D supplements, like any other food supplements, pose certain health risks because they may enhance intestinal permeability and indirectly potentiate inflammatory and autoimmune responses. All the same, a book on popular paleo has also come out to contribute to the pseudoscientific approach to the vitamin D issue. Nonetheless, things seem to be getting clearer maybe, because once everything will fall into place anyway. (Dr Csaba Tóth)

Scientific publications of the authors on vitamin D: