Suicide rates among the First Nations in Canada are on the rise. Reasons and a possible solution. 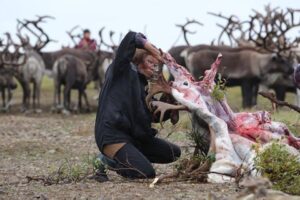 There have been several well-intentioned attempts during the past ten years to decrease the suicide rates among the Canadian aboriginals. These have, however, resulted in no major breakthrough. The reason for the rise in suicide rates, which mainly affects the youth, is allegedly not known. An increasing suicide rate has also been reported for other northern aboriginals, including the Greenland Inuit where government initiatives to prevent suicide have had no major effect.

Even though the First Nations people are afflicted by several socio-economic problems, we are of the view that the root of the problem is not of a social origin. It should be noted that action plans that have been set out so far have concentrated on social aspects, and have not had much success.

We believe that both the source of the problem and the solution lie elsewhere. It may sound trite, but the affected First Nations represent the first generation of those shifting away from their traditional lifestyles, including a traditional meat-based diet, and now subsisting on an unhealthy Western-type diet. It is also known that, unlike other Western populations, among the First Nation aboriginals and Inuit people suicide rates decrease with increasing age. The diet of the aboriginals has undergone major changes during the past 50 years and the fashionable and unhealthy Western-type diet components are consumed more frequently among the youth, which may explain the differences in suicide rates between the different ages.

The traditionally coveted food items of the aboriginals, which contain high amounts of vital nutrients (animal fat, protein, vitamins and micronutrients), are found to be present in much lower amounts in a Western-type diet. Decreased nutritional value of the Western food contributes to systemic low-grade inflammation which may result in damage and unusual function of the brain. The link between the rapid dietary transition and deteriorating health was also described by Canadian researchers.

Divergence from traditional food systems has had far-reaching negative impacts on health in other parts of the world too. In the Near East, for example, there has been a recent precipitous increase in diabetes which has resulted in a prevalence that outnumbers that of the US. Accelerated deterioration of health parameters in these countries can also be explained by a rapid deviation from traditional diets within a short space of time.

The high number of suicides among the First Nations people is almost certainly linked with the rapid transition in diet, which amongst other pathologies, resulted in dangerously low vitamin levels, including vitamin C. Contrary to popular belief, vitamin C is abundant in traditional meat-based diets.

Along with the change in diet, there has been an increase in alcoholism and drug use in these communities. There are other studies in the medical literature which point to the role of a Western-type diet in health problems. This phenomenon has been intensively studied by medical anthropologists among the Inuit people too. It seems that the more traditional the diet (or the greater the number of traditional food items consumed), the healthier the indigenous people are.

Suicide rates among First Nations communities are high, especially in the younger age groups, who have been born into a modern rather than a traditional lifestyle, and with it the associated unhealthy Western-type diet as well. This diet is not only based on cereal grains and ”junk food”, but also lacks nutritious and valuable foods like animal fat and organ meats. Members of the elderly population seem to be relatively less afflicted by suicide and other health issues. These elderly people lived their early years in a more traditional world which also contained more traditional foods with their associated health benefits.

Our clinical experience with patients indicates that the nutritional intervention therapy that we use is able to reverse thoughts of suicide even in a crisis. In addition, maintaining the diet enables the normalization of brain function in the long term.

The method we use is not yet used by others. Principals of the method contradict the currently accepted medical trends. Yet, our method and results are underpinned by the medical and scientific literature. We are also of the opinion that there may not be other methods to resolve the current situation.

Note: This article was written upon request by another platform in 2017 but until now it remained unpublished. Since the growing suicide rate among First Nations is still a major problem we now publish this piece on our webpage in the hope that this will be eye-opening for those who are affected.