Is jumping into cold water during hot weather dangerous or not? 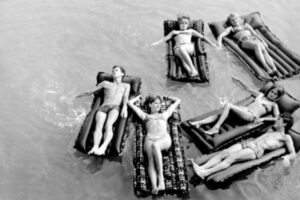 Although the end of the summer is approaching it still deserves to reconsider this old myth.

The first observation is OK. However the reason differs from sunbathing itself. Yet, the second is lacking any scientific basis.

Let’s start with the second one because it is more simple. There is no such reflex. It is not the cold water contacting the face which causes a decrease in the pulse but retaining the breath. This is called breathing arrhythmia. The heart possesses an autonomous system for rhythm generation. A major evidence for this is (if physiology itself wouldn’t suffice) coming from those patients undergone heart transplantations. A transplanted heart without an external innervation is working well in these patients. The heart can not stop in response to cold water contacting the face. Let’s see the first claim. If cold water itself would result in heart attack, Russian and Finnish people would have been seriously afflicted by this given their long traditions to jump into icy water. Mother bear only hopes that the bruin was not sunbathing. Then what is the reason for the deaths?

Upon jumping into the water there is a need to increase cardiac output. This is because of the increased drag force in the water. This increased need is met by two mechanisms. On the one hand blood pressure increases due to the constriction of vessels and on the other hand heart frequency increases. In order to improve oxygen supply respiratory rate also increases. We need reactions to be activated within seconds, otherwise we got into trouble.

Normally, these reactions are functioning well. Accordingly, in the 80’s nobody has ever thought to warn German tourists about the dangers of jumping into the cold water at Lake Balaton, Hungary (In the 80’s tourists from East and West Germany used to come to Lake Balaton to meet with each other. And actually given their experience with the cold North and Baltic seas they were not reluctant to bathe even at low water temperatures.) Tourists bathing in Lake Balaton in the 80s.
Source: balaton.vehir.hu

Then, what is the explanation for the many reported deaths upon jumping into water?

As we mentioned above, there are three reflexes to be activated upon increased physical load. Out of these, increasing breathing rate can be taken out if we are underwater. The presence or absence of the two other reflexes will decide our fate. If our vessels can not constrict and/or our heart rate can not increase sufficiently we can get into trouble which often ends with death.

Importantly, these reflexes are dramatically decreased by alcohol, antihypertensives and other heart medications. One of the most well-known side effects of antihypertensives is causing the so-called orthostatic low blood pressure. Thus if we are taking medication lowering blood pressure we may experience that we sway upon exerting sudden physical activity. This effect is brought about by antihypertensives blocking the natural constriction of vessels in response to physical activity. The same thing occurs upon entering the water suddenly in those taking antihypertensives. Given the blocked vasoconstriction the heart compensates with a high heart frequency which can result in heart insufficiency.

Moreover, most patients with heart disease are often taking beta-blockers. Beta-blockers decrease cardiac output, and therefore may contribute or can result in a compensatory elevation of heart frequency which may also result in cardiac failure. The same phenomenon explains why these medications should be discontinued before exercise stress tests.

Bathers may not be aware of the fact that alcohol itself may elicit these negative effects too. Alcohol may block the constriction of vessels and as a result may elevate heart frequency significantly which may also result in heart insufficiency.

The two factors, especially when combined, may elevate the cardiac risk in the beach significantly. The real cause again is the heart failure and not drowning or myocardial infarction (which could be identified on the autopsy table.) My colleagues from the ambulance service at a presentation
Image source: http://www.nyugat.hu/tartalom/cikk/vizbol_mentes_ujraelesztes_tofurdo_bemutato

The tragedy in these cases is predictable given that heart failure develop within a few seconds following jumping into the water. The chance of a successful resuscitation is extremely small, even if help is close. But actually this has nothing to do with the sun, the water or warming up of the body.

I remember one of my patients who developed fever and then the same mechanism resulted in heart failure. The patient in an attempt to reduce his fever drank alcohol. Then within 20 minutes he started to cut wood. Fever together with alcohol behaved in a way similar to antihypertensives and alcohol. The patient developed heart failure and he could not be resuscitated.

So, gentlemen and ladies, be wary of plunging into the water if you are taking heart/antihypertensive medicines or alcohol. Otherwise, take your paddle boat and just jump into the cold water following sauna. Of course, it is not bad either if you eat in a paleolithic ketogenic way.

If you eat in a paleolithic ketogenic manner physical performance increases under the same oxygen supply. Of course, this will not counteract the risks associated with alcohol and medicines.

Source of the cover figure: http://iddp.ru/russkaya-banya

Author: dr. Csaba Tóth
The author is a physician from Hungary with 20 years experience in intensive care medicine, internal medicine and family medicine.