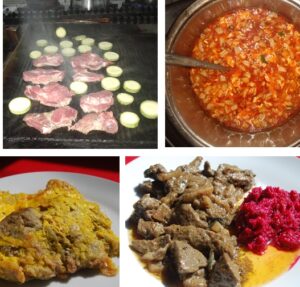 We present the results of a five-days clinical group on the paleolithic ketogenic diet. The participants were patients whose clinical data are summarized in Table 1. In the five-day program patients ate together twice a day. In addition, they received a daily package, which they ate when they were hungry. The first night patients ate from the package, but from the third day on packages remained untouched.

There were individual and group consultations each day. First we controlled diagnosis and assumed the health status of the patients. During the individual consultations we discussed the specific aspects of the disease and determined the means for follow-up as well as the chance for recovery. We also set up a plan for tapering medication. We measured weight, blood sugar, blood pressure and ketones before meals and in diabetic patients also after the meals.

During the group consultations we gave over theroretic and practical knowledge needed in relation to the diet. This is of utmost importance since the evil is in the details.

In the second part of the program we taught kitchen techniques in which we also involved the relatives of the patients. We performed laboratory testing upon diet initiation, on the 3rd and on the 5th day. Medication according to the original plan was shaped by the daily measurements and laboratory findings. We never instructed patients but made a shared decision. Originally all patients had been following a Western-type diet. Four patients out of the five had been following a diet preferred by the standard diabetology that is a diet extremely low in animal fat. All group members reported alcohol being entrenched in their everyday lives. This by no means was equal to alcoholism in either patient, but patients drank 1-2 dl of wine or small amounts of palinka (traditional fruit brandy in Hungary) daily. We come back to this issue at the end. Overall, patients cooperated well which was also ascertained by the continuous positivity of the urinary ketone strips from the second day on. Laboratory ketone tests also showed positivity on the 3rd and 5th day (Figure 1.). Patients reported that it was easy to adhere to the diet.

All patients lost weight on consecutive days. By the 5th day there was a weigh loss of 1.9 kg on average. In patient #3 there was a dietary mistake as admitted by the patient himself. This explains weight gain by the 5th day in this patient (Figure 2.).

Three patients were taking oral antidiabetics (patients # 2,3,4) and one patient used insulin (patient #4). In all three patients it was possible to discontinue antidiabetic medication in such a way that blood glucose remained relatively stable. A complete normalization of blood glucose is expected only after the normalization of insulin resistance along with further weight loss and the attenuation of the side effects of the previously taken medications. The weight graphs are indicative of insulin resistance in all patients. Patient #3 admitted a dietary fault on the 5th day which explained his blood sugar elevation (Figure 2.). All patients had a long (at least 5-year) history of taking beta blockers. Side effects of the beta blockers, including insulin resistance and other metabolism modifying effects, are only expected to cease after several months on the diet.

In four of the five patients (in those with overweigh) triglyceride decreased greatly (despite stopping cholesterol lowering agents). This is also in support of the fact that elevated triglyceride is not the result of fat consumption. In the patient with the lowest initial level of triglyceride (patient #4), triglyceride has elevated after diet onset, which is also in line with expectations. Continuing the diet along with the attenuation of the side effects of  beta blocker is expected to result in a further decline in triglyceride in those with high triglyceride level (Figure 3.).

Figure 4.: Cholesterol leves (mmol/l) while on the diet

Originally four patients were taking medications on a daily basis (# 2,3,4,5). Tapering medications was guided by the laboratory data and by our preexisting experience in this regard.

On the last day of the program all patients reported improved well-being. This is likely due to the cessation of previous complaints. Patients reported the following improvements:

Two patients reported transient diarrhea. This is a usual complaint during dietary transiton. All patients reported the program to be effective. It can be said that by the fifth day patients got shaped into a real team. Patients said that this community experience contributed to keep motivation and to get through the initial difficulties. Upon completing the five-day program all patients opined that they would continue the paleolithic ketogenic diet.

It is generally believed that 1-2 dl of wine does no harm or even beneficial. This claim has never been scientifically proved. Our experience indicate that wine, for example, is particularly harmful. Previously we used to have a patient who suffered from psoriasis. This patient did not improved on the paleolithic ketogenic diet until he stopped drinking his usual small amount of wine. A major problem with wine is that all wine types contain sulfides which is used during the production of wines. There are substances in the wine which may elevate intestinal permeability and then enter the circulation giving rise to allergic reactions. Patients only have the chance to recover if they break with their habit of consuming alcohol even in the so-called “cultured” manner.

Raw materials and the prepared foods: dishes were prepared using meat and offal from organic, farm-raised animals. Our chef did not use poultry and only used animal fats. The amount of plant food was minimal.

dr. Csaba Tóth
The author is a physician from Hungary with 20 years experience in intensive care medicine, internal medicine and family medicine.