In the context of the extensive media coverage of the COVID-19 epidemic, mention must be made of another, less explicit epidemic which has been ongoing in several countries for a long time. Do you wonder what this epidemic may be? It is the epidemic of vitamin D deficiency. This is not a pun, but a term coined by Michael Holick, a key researcher of the subject in 2010 (Holick, 2010).

When the COVID-19 epidemic started, little was known of its nature. As more and more information becomes available, it seems that the COVID-19 epidemic has more features common with seasonal virus epidemics than features which set it apart from them. Currently, many details of the COVID-19 epidemic are accessible, but they are like pieces of a puzzle which are often put together in the wrong way. As we have pointed out in our statement a month ago, based on what we know about the nature of epidemics, viral infections and respiratory diseases, its seems vitamin D (or, to be more specific, the lack thereof) may play a major role in the contraction of the COVID-19 disease and related mortality.

The subject of vitamin D is studied by reputable associations of medical doctors. A new recommendation is published almost annually. The recommended dose of vitamin D increases year by year, which, however, has little practical impact. The number of those general practitioners who are willing to prescribe vitamin D is growing, which is an improvement. By contrast, medical specialists still refrain from recommending vitamin D on a regular basis, even in the case of diseases where medication has been shown to decrease the vitamin D levels. Even if doctors realise the importance of vitamin D, there is another problem. The supplementation of vitamin D in itself will not bring about long-term results, as complete rehabilitation requires a complex supplementation of other vitamins, microelements and mineral substances which cannot be ensured with the use of a single supplementary vitamin but requires a proper diet. In addition, the consumption of carbohydrates has a basic impact on the way vitamins operate in the human organism. The adequate availability of vitamins will not suffice in itself, as the consumption of even a very low amount of carbohydrates may reduce their efficiency significantly. This is particularly true for vitamin D: for example, the fructose of fruits prevents inactive vitamin D from being transformed into active vitamin D, which, in turn, may result in a chronic vitamin D deficiency and may have catastrophic consequences.

When writing our statement, we primarily relied on our medical expertise and intuition on the subject of vitamin D. In the last month, however, specific evidence on the COVID-19 virus has been found which provided further information on the subject.

The section below gives a list of pieces of evidence showing that vitamin D deficiency plays a role in the spread of the COVID-19 epidemic, in the contraction of the COVID-19 disease and in related fatalities. For expert readers, we would like to note that the evidence below falls into the category of observational evidence and that strongest evidence comes from intervention-based tests. We would also like to call attention to the fact that such tests are ongoing as shown by the databases of registered clinical tests, yet no such results have been published so far. Once they become available, we are going to inform you.

Now let us see the existing pieces of evidence.

1.
The negative correlation between the severity of the COVID-19 disease and the vitamin D level

The correlation between the severity of the disease and the vitamin D level was studied in the case of 212 COVID-19 patients in three South Asian hospitals (to protect the personal data of patients, no further information was given). Only 4% of patients in critical condition had a normal vitamin D level (30< ng/ml), while 44% of them had an insufficient vitamin D status (20-30 ng/ml) and 52% showed signs of deficiency (<20 ng/ml). Ninety-six percent of patients with mild clinical outcomes had a normal level of vitamin D, while 2% of them had an insufficient and another 2% a deficient vitamin D status (Alipio, 2020).

The diagram below gives an easily interpretable visual representation of the same correlation. The significance of the correlation is extremely high. Indeed, such significant correlations are very rare in biological systems. 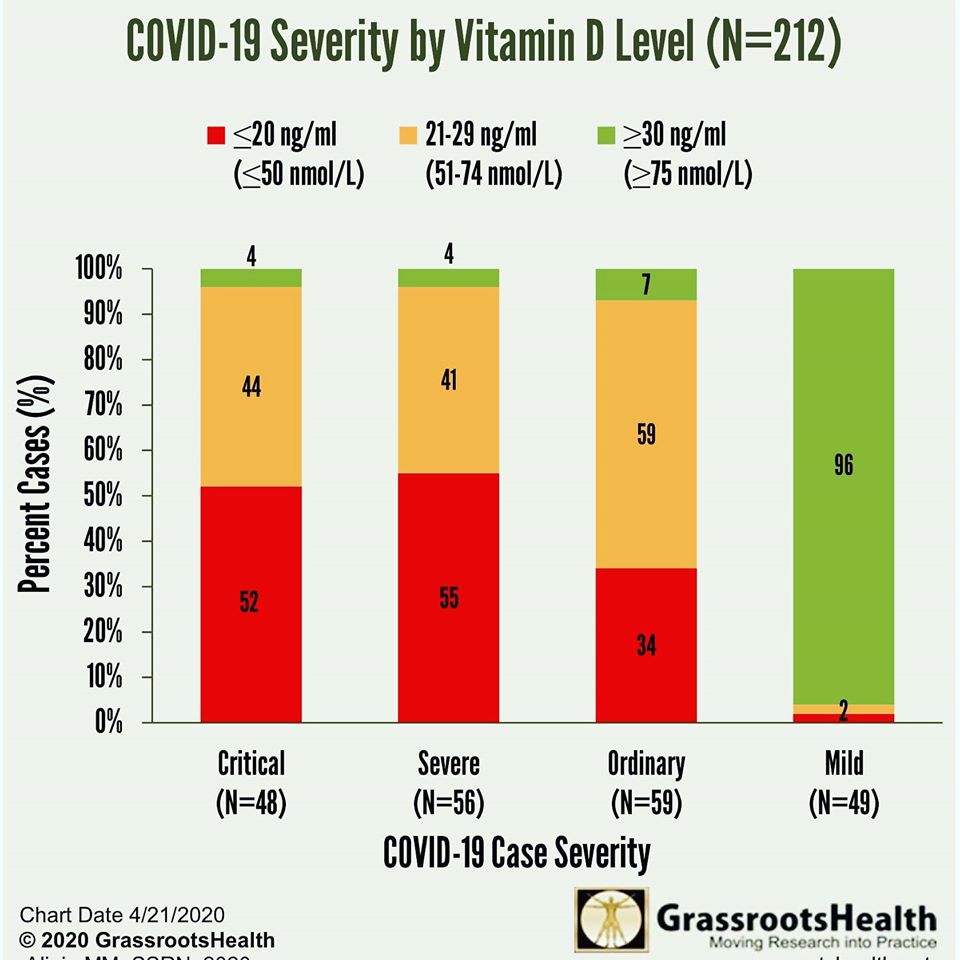 Source of the figure

2.
In every country, the COVID-19 disease has the greatest impact in nursing homes

3.
The correlation between the number of infections and ethnicity/colour

In relation to the COVID-19 disease, this correlation has been published only very recently, e.g. in the United Kingdom. As is often the case, only political explanations were offered, which is basically wrong. As evidenced by relevant technical literature (or clearly understandable with everyday common sense) those persons who live at a latitude that does not fall in line with their skin colour are more prone to have a lower vitamin D level, as skin pigmentation hinders the synthesis of vitamin D in the skin. Consequently, they are more susceptible to vitamin D deficiency-related diseases. For example, it has been widely known for decades now that in Sweden certain diseases occur more often among persons with a migrant background, e.g. the rate of autistic children is higher among them (Gillberg, 1987). This is especially true for people of Sub-Saharan African descent. Another well-known correlation is that Afro-American people living in the Unites States of America have the lower vitamin D levels and, consequently, a worse health status (Harris, 2006). Presumably, the fact that in the United Kingdom members of the ethnic minorities are disproportionately affected by COVID-19 is related to their low vitamin D levels.

4.
The correlation of vitamin D deficiency and COVID-19 deaths broken down by country

As we are not aware of any published study on the subject, we performed a study on the basis of available data. (Please note that this is not an extensive study and our calculations will be updated as soon as new data become available.)

The best indicator of COVID-19 deaths is the number of deaths per population, given that it does not depend on the number of tests performed and that, from a statistical point of view, death is a so-called “hard endpoint”. Obviously, the process of identifying correlations with the number of deaths is greatly affected by the fact that the individual countries are in different phases of the epidemic and by whether statistics extend to only fatalities in hospitals, or to fatalities in and outside of hospitals. The final conclusions will be drawn after the epidemic ends, which, given the potential recurrences, may take several years.

It is a well-known fact that vitamin D levels can differ greatly due to age, season of the year, medications and other factors. This means that it is not an adequate approach to work with data on vitamin D levels for the complete population. Therefore, our comparison is restricted to the following factors:

(1) population over the age 65
(2) persons who do not live in nursing homes (due to the fact that more countries offer statistics on this population segment)
(3) D vitamin level measured during winter
(4) countries where, due to geographical location, the winter season is characterised by winter-like weather
(5) climatically homogeneous countries (e.g. Russia and the USA were excluded as a given study may not be assumed to cover the entire country)

The figure below gives a list of the vitamin D levels (measured among the elderly during winter) in specific countries in an ascending order. The source of data on certified COVID-19 deaths: worldometers.info/coronavirus/ 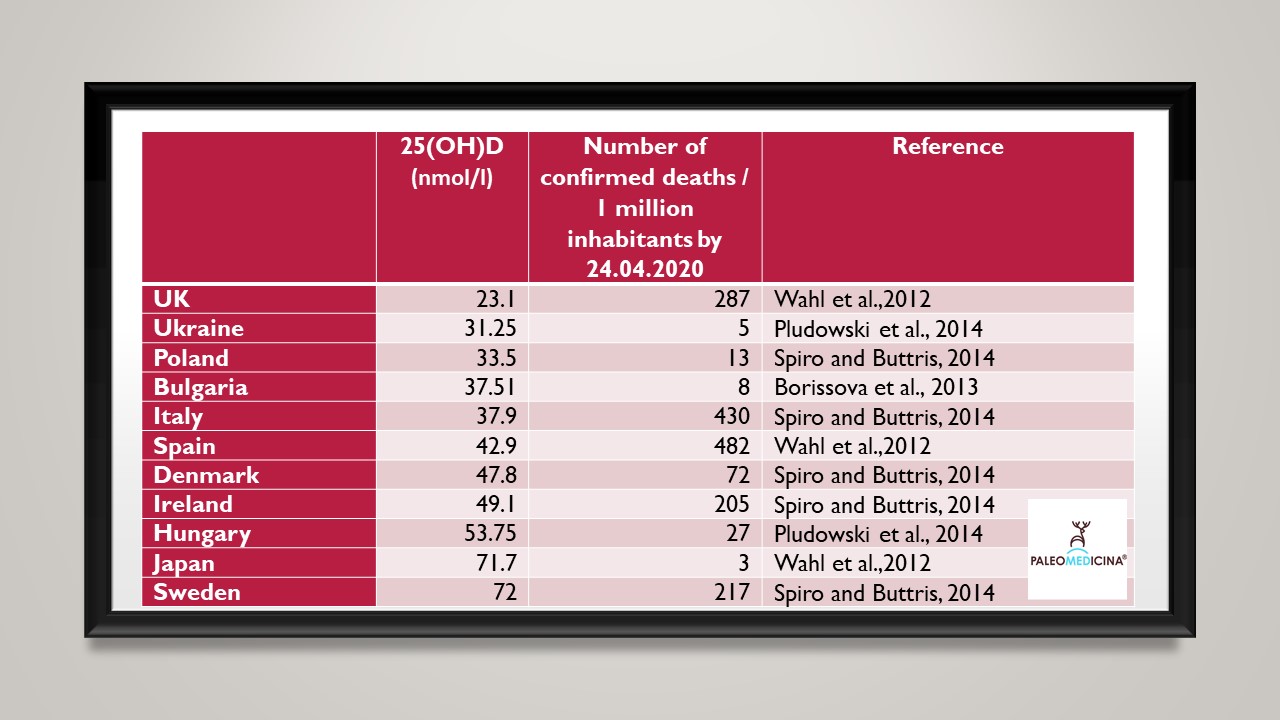 It is an illustrative correlation that in Europe the lowest vitamin D level (measured among the elderly during winter) was detected in the United Kingdom, which was hit by the COVID-19 later, but where the number of deaths is approximating that of Italy or Spain.

The highest vitamin D level was measured in Japan and Sweden. In Japan, COVID-19-related mortality is among the lowest in the world. And, as we all know, Sweden employs an unconventional approach and refrains from introducing restrictions, and still has a lower mortality rate than other Western European countries do.

On this list of vitamin D levels, Hungary ranks third (the first being Sweden and the second Japan). This may account for the low number of COVID-19 deaths compared to other European countries. 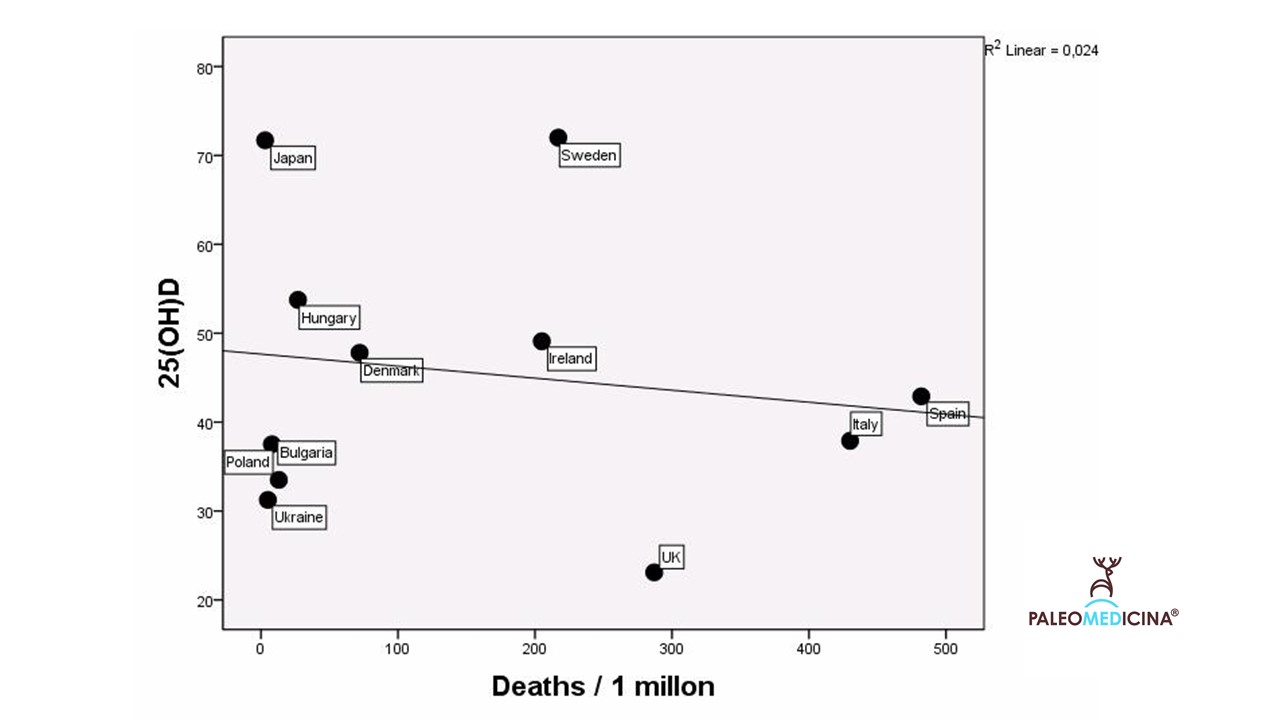 The relationship between 25(OH)D (nmol/l) and confirmed COVID mortality by 24.04.2020. Graphical representation with a fitted line. The death rates are as of 24th Apri 2020.

There is yet another interesting fact which is illustrated by this figure and discussed by other analyses (e.g. Hilger et al., 2014), but has not yet become common knowledge. As shown by a North/South gradient, D vitamin levels are higher in Northern Europe and lower in Southern Europe, which is counter-intuitive.

The subject of vitamin D is mentioned almost exclusively in the context of sun exposure, e.g. how long one needs to sunbathe to reach the ideal vitamin D level. Yet, as evidenced by this table, a geographical comparison shows something different: the vitamin D levels measured in Southern European counties (specifically in Italy and Spain) are lower than the levels measured in the Nordic countries. This implies that the phenomenon does not result from geographical latitude but from something else, which, most probably, is the traditional Nordic (above all, Swedish) diet characterised by a high intake of fish and fish oils. By contrast, in Italy people tend to consume much carbohydrates (large quantities of pizza and pasta with cheese, ketchup and vegetable oils which are assumed to contribute to the leaky gut syndrome), which may have played a role in the extremely high number of deaths. In a previous article, we discussed why sunshine does not qualify as the evolutionally best source of vitamin D.

As mentioned in the first part of the present article, mainstream medicine and epidemiology fail to deal with the evolutionary approach, that is, how mankind has survived the attack of viruses for 2,5 millions of years and what are those resources that the modern human organism can, due to its genetic characteristic, mobilise when needed. Vitamin D is one of the related factors.

Vitamin D is a not a silver bullet, and we are convinced that a medical solution must not be limited to a single nutrient. Obviously, this is true for vitamin C supplements as well, which are currently very popular yet whose efficiency is not supported by appropriate data. Vitamin D is a useful index, as it reflects the general status of the organism. There is only one diet that in itself can ensure an adequate vitamin D level while not inhibiting the inactive-active transformation of vitamin D: the paleolithic ketogenic diet (PKD). (This is the meat-fat diet called „the Stone Age diet” by our predecessor and role model, Walter Voegtlin.) 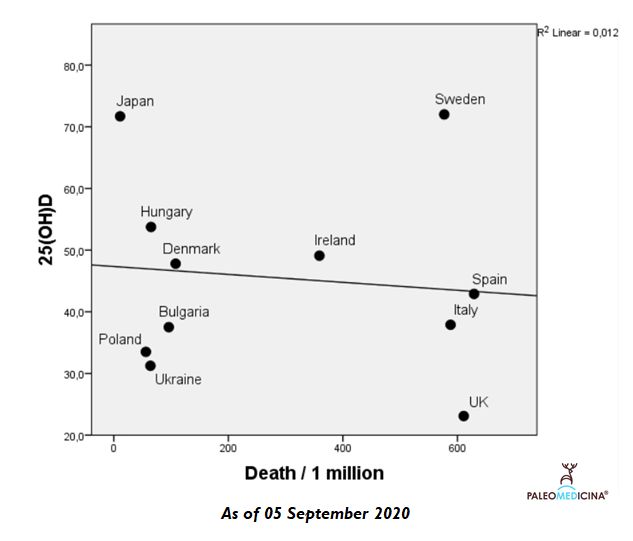 We again prepared a statistics between vitamin D levels and COVID-related mortality. As we anticipated in April there is now a change in the top three countries. Death numbers jumped in Ukraine but in Sweden death numbers are on the decline already for several months. If you look at the graph you can see that currently the major outlier deviating from the expected inverse correlation is Sweden, the only country which has not imposed strict social distancing measures.
It is our aim to update this graph every month. We still believe that you cannot hide from the pandemic. At the end it will be your diet which will decide your fate. At the population level, vitamin D is one of the best proxy to your healthy diet and overall health status. 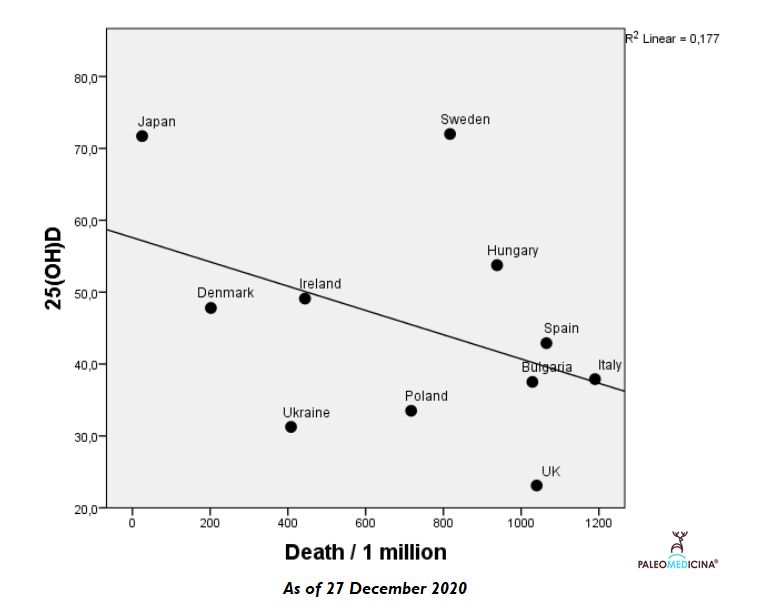 Right before the start of mass vaccination (27.12.2020). As compared with the September graph, data points got closer to the fitted line of the inverse correlation. 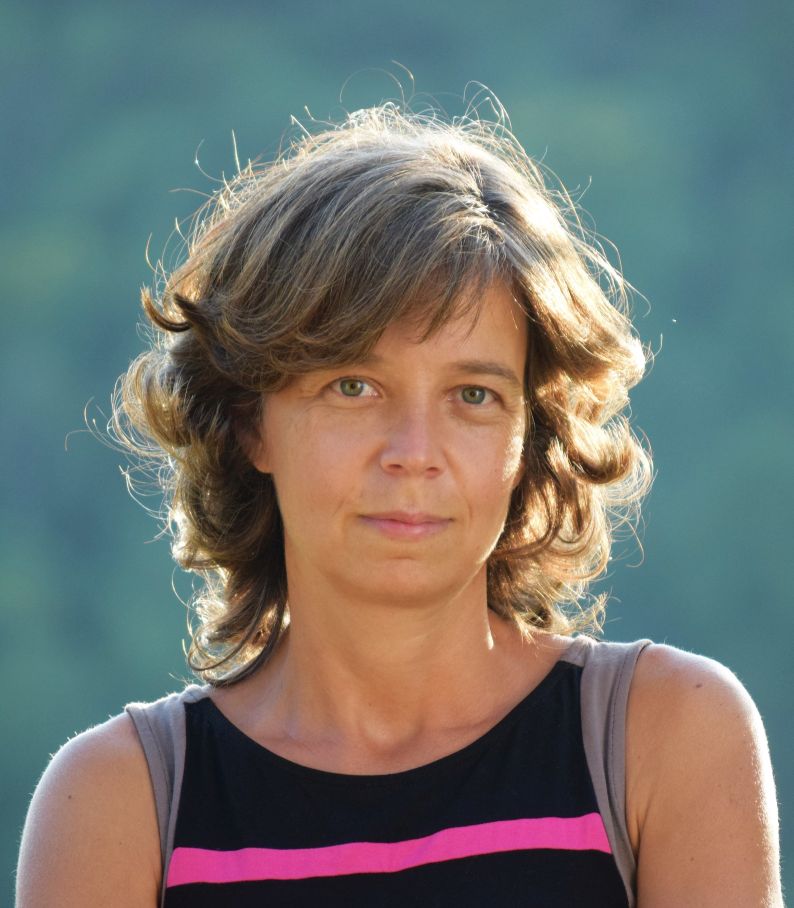 Author: Dr. Zsófia Clemens
Other publications by the author on Vitamin D